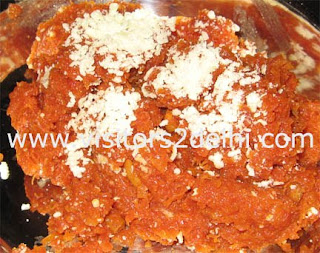 (Hot – piping hot Gajar ka halwa - the Supreme One!, not to be left behind Moong dal ka halwa and more…)

Truly on could sing, all I want is some Gajar ka Halwa. I know, in winter what with ravenous appetites it is difficult to control the craving for sweets and what tops the list are hot – piping hot halwas. Aha they are food for the souls, tasty extremely filling and leaves one feeling warm, comfortable and in love with world (despite the bitter cold ) feeling inside. The trick of the halwa is that it is packed with all natural goodness which offers warmth to the body and gives it energy for the winters. So it is ghee (clarified butter), dry fruits – almonds, raisins, milk (for gajar ka halwa), suji (semolina), crushed moong dal.

Gajar ka halwa or Gajrela as it is popularly fondly called beats the halwas hands down during winters. It is made from the English variety of carrots which makes its appearance in the cold season. And with it starts the romance with the Halwa. The quickest way to make it at home, is to simply grate in the carrots, add the sugar, milk, ghee and pressure cook. Decorate with raisins, khoya and serve. Though strictly “No comments” on its taste. Purists will scoff at it, (as does yours truly also except when she makes it in a jiffy then it is defined aka 2 minute halwa!!!) The true delight as my mother makes is to simply heat the grated carrot to remove the fluid from it, slowly cook it with milk, ghee, sugar, the adornment with raisins, khoya…I am not sure of the proper order but well, the halwa is mouth watering. The other best of course is to buy from the market – aah and are they plenty in their offering. A couple of spoonfuls is enough to warm the cockles of the heart. It does become heavy on the stomach is devoured in greedy proportions.

Moong dal ka halwa is made out of moong dal (split lentils – mung beans), heavy duty roasting slowly in pure ghee to which huge quantities of almonds, raisins, walnut….(dry fruits – mawa) are added. It is so rich that a couple of spoons are enough satiations for the stomach and soul.

Location: Some popular ones include:
Gianji’s - Their gajar ka halwa and moong dal ka halwa is wonderful in the evenings. Their outlets dot the city.
Ghantewala Halwai (the venerable sweet / confectionary shop in Chandni Chowk) has moong dal ka halwa, gajar ka halwa.. (as the shopkeeper put it, we will sell till the gajar season lasts!!!)
Chainaram’s in Chandni Chowk
Nehru Place is dotted with shops selling gajar ka halwa. There is one next door to Sharma Photocopy where it is divine.
Bikanerwala, Haldiram’s, Rameshwar, Anupam, Nathu’s….
(Do write in if you have your favourites – it will be worth a try!!)

Timing – It is available from morning 10:00 am till late into the evening. There is no best time to eat but it is to beat the evening cold, both the halwas come to their own. The price ranges from Rs. 200 per kg to Rs. 350 per kg. A plate can cost anywhere from Rs. 10/- or more.

Highlight - I think nearly every halwai in your nukkad (round the corner) market offers it and one develops a sweet tooth for it. Each to his own favourite joint when it comes to eating Gajar ka halwa and moong dal ka halwa.

Insider Tip - What further adds to the halwa is that the gajar ka halwa, the glorious one is available only during this weather. And the other hot favourites like moong dal ka halwa, lauki, seethaphal, sohan halwa, Karachi halwa….the commonplace suji..the feast is a true fit for the gods. It does taste heavenly when combined with other sweets – Gulab Jamun, Ice-cream, kulfi….take your pick or simply enjoy the ghee dripping delights!!!!

There are other sweets eaten hot during winters – gulab jamun, malpuas…..that is of course musings for another day and post.
Posted by Chitra Balasubramaniam at 10:10 PM No comments:

Eating Out in Delhi

Delhi is a huge melting pot of influences which is amply reflected in its cuisine. Today, the melting pot assimilates national, international cuisine, some cuisine “adapted” to Indian taste well – Chinese a huge example in this direction. Delhi offers innumerable places to eat, each having its own traditional offering. The food palette includes almost all kinds of food from India and a delectable spread of International Cuisines. Traditional Indian food is classified apart from geographical bearings as per caste, religion. The nuances are plenty as also the range of spices, condiments and vegetables, fruits, cereals, meat, rice …that is added.

The Capital’s foodaddiction includes the classy Chandni Chowk fare – the Delhi Bania style of cooking in pure ghee without the use of onions, garlic, the Mughal style of kababs, biryani, the Punjabi touch of Pindi chole, Rajma chawal…Regional cuisine can be tasted from spicy Andhra Fare, Namma Tamil sapadu (Karol Bagh, Lodhi Road..), Malayali fare of puttu…Gujarati, Rajasthani snacks and thalis, Parsi, Iranian, Anglo-Indian fare…..Yes, it is food lover’s paradise. No pun intended, a friend’s husband on a visit to Delhi from Kerala, asked in all innocence “don’t people cook at homes, the food stalls are always so very crowded”!!!

This section tries and captures some of the best to be indulged in Delhi. No, this is neither a “eating out of the street” kind of a vengeance section neither “oh how can they eat street food – with emphasis only on chic upmarket cuisine” atitude. But in turn it is a slave to the taste buds, yes anything that tastes good, is different, has you ruminating about its glory during the day and pursuing it salivating in your dreams. Being a vegetarian, an eggetarian to be precise, the non-veg food section might not be justifiable but I shall make amends with recommendations from die hard “only non-veg” friends!

The Fine Art of Bargaining

This is a humorous take on the way business is conducted in Delhi where boni or the first deal of the day “boni ka time” has been stretched to incredulous limits. (The article appeared in the Indian Express – Jan 4th 1997. This is the unedited version. The edited version if I can find the clipping I will scan it in and incorporate here!)

The oft repeated word one hears every morning is, "boni ka time" or "Boni kar do" . "Boni" is the first deal of the day to be clinched by the seller. The belief being that if the first deal for the day is made without much ado and in the hands of a prosperous customer, the rest of the day will proceed well and will not cause any problems. Since, for a seller the getting of the blessing of the Goddess of Wealth is of primary importance, he goes to any extent to procure it.

This system is religiously followed by all traders be it a wealthy trader or a footpath roadside seller. Although at times, it is possible to get good bargains during this period, the pitfall remains, if you were to simply bargain and walk off
without buying, you were in for a lot of trouble and verbal abuse. For in this case the trader would superstitiously tend to think that the rest of the day would be also similar. This together with worshipping of the first income of the day is
centuries old.

Today, however, this practice of " boni" has been taken to unimaginable lengths . Early morning deals till 10 am or 12 am were once considered " boni" period but there is no dearth of such deals even at 3.00 pm. I once took an auto at 4.00 pm , the 
driver with great reluctance agreed to take me to my destination. As always, his meter was fast but he told me, that he drove the auto in the evening and had just brought his vehicle on the road. I being his first customer was doing the "boni". I promptly shut
up and paid up a couple of rupees extra. He immediately touched the money with his eyes and circled the meter. You bet, he should thank it for giving him the extra bit.

Again once, wanting to get to office on time, I went to the doctor early in the morning. This doctor used to take her fees on alternate consultations alone. I was her first patient and it was my second visit. She told me to continue with the same medicines for another couple of days. As I got up to leave, she
hemmed and hawed and finally said, " It is early in the morning and you are my first patient", so I paid her fees in the name of Boni. The same action of touching the eyes with the money was carried out.

A similar story was repeated at my cousin's tuition class. They had weekly system of paying and she being the first student on the pay day, gave the money. The teacher took it, touched it with his eyes, offered it to the statue of Lord Ganesh and Goddess Laxmi before locking it. And here was I thinking they were both indebted to the Goddess of Learning for giving them the skills.

Observe this practice in the office of any professional - be it a lawyer, architect or tax consultant, you would know what I mean. Of course, Vidya (Knowledge) and Vaidya (medicine) should be made available at a price otherwise it does not seem valuable to the recepient, but its emphasis now seems to be purely monetary .

The various professions hitherto differentiated on respectability, dedication and nobleness seemed to be tied together with its preoccupation on Nakkad Narayan. Avocations supported by Goddess Saraswati, Vishwakarma and Dhanvantri (medicine) seemed to be dedicated to Goddess Laxmi and Kuber.

The difference between a seller of goods, an auto driver or a teacher & doctor is hardly evident. They are all commercial people for whom Lady Wealth is of prime importance. She seems to rule their lives and each feels that a bad first deal would ruin
the commercial success of that day. Everything is a Dhandha.

I realised, the ridiculous extent to which this "boni and dhandha" had been taken when at the Chirag Delhi crossing a beggar woman approached us saying , " madamji, ek rupaiya dekhe mere boni kara do !" (Madam, give me one rupee and start my business!!!)

(P.S. I think even I should start quoting it to the editor!!!)
Posted by Chitra Balasubramaniam at 1:15 AM No comments: