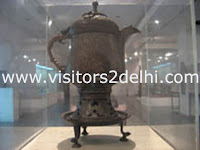 The National Museum is the "prima donna" of all museums in the country. It unfolds a fascinating account of the 5000 history of Indian Civilisation from the Indus Valley Harrappan Civilisation dated to (2500 BC - 1500 BC) to objects till the 19th century. The 2,00,000 plus artefacts in its repertoire has been put together from excavations, donations, buying from antique dealers and those in the possession of the Government. However, less than 1/3rd of the objects are put on display. No pieces from the end of the Harappan Civilisation (1500 BC) to the 3rd Century BC have been excavated so far, hence there are no displays for this period.

The Museum has some of the finest pieces of Bronzes, Mauryan Art (the Mauryan Period 3rd Century BC). Two pieces stand out - the Mauryan Head and the ring stone. Described as outstanding pieces of stone work with the characteristic Mauryan polish. Jain Philosophy, Buddhist icons, the Kushana period pices.... The Museum also has an outstanding section on manuscripts, coins, pre-Colombian art, jewellery, ivory carving, silver pieces. The textile collection is ecelectic in its limited space. From icons, sculpture, paintings, writings.... it is gloriously spread over three floors.

Location - Far end of Janpath next to Vigyan Bhavan, just 1 km or so from Connaught Place.

Highlight - It has a lovely collection of Miniature Paintings. The Musical Instrument section which is gift from collector Sharan Rani Backliwal is mindblowing. It is a fascinating collection of instruments way back to 17th Century AD and earlier. Guide facilities are available as also recorded walks which one can put on to understand the history. Special exhibitions are hosted from time to time which showcase some of the finest collections from Indian History and Heritage like the Jewellery of Nizam, TAPI,

Insider Tip - Wear sensible walking shoes as the exhibits are spread over a large space. Some of the exhibits are timeless and it is hard to believe they were crafted centuries ago like the Saraswati at the foyer. Most of the Department heads possess wonderful knowledge on the collections, history, collecting in general and also specific nuances of each period. They are accessible and proud to explain the pieces and nuances of the various craft especially jewellery and textiles.
Posted by Chitra Balasubramaniam at 12:13 AM