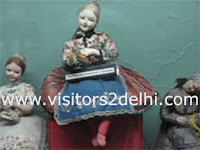 Ever want to relive your childhood – visit the Dolls Museum (Shankar’s International Dolls Museum). It transports one back to naïve times of fun and is rejuvenating. Visit with someone who is equally fascinated with dolls, well it is great fun. One can get the history of the place from the Museum itself. To put it simply, it is one man’s love for dolls – yes, K. Shankar Pillai, well known cartoonist, Editor of Shankar’s Weekly and founder of Children’s Book Trust (CBT) was gifted a doll by the Hungarian ambassador in early 1950. He loved it so much that he began seriously collecting costume dolls from various countries he visited. Today, nearly 4000 dolls are on display representing 85 countries. It is the world’s largest collection of costume dolls. Some beautiful pieces belong to the erstwhile Eastern Block. The beauty of the costume dolls is such that it transcends time barriers. What is more attractive is the hand embroidered costumes of the dolls. Each dress detailed to perfection to the last T. Incredibly beautiful, I have spent hours soaking the textile range in!

Timing - 10 am to 6 pm (the ticket counter closes at 5:30 pm). The museum is closed on Mondays and other holidays. Parking is difficult or can be done across the road.

Highlight - Some of the prized dolls include the Kabuki dancers of Japan, Boys Festival and Girls Festival of Japan, Ten pairs of aborigines from Australia, Indonesian dolls….. many received as gifts from visiting dignitaries from the Madame Tito, Queen of Greece to the late Mrs. Indira Gandhi and Mr. Rajiv Gandhi.

Insider Tip - The museum has its own workshop which produces dolls for collectors and connoisseurs. Do visit the book shop also. The Udipi Hotel sells some tasty fare as also the food shop in the subway and a couple of street food vendors of naan / chole.
Posted by Chitra Balasubramaniam at 4:43 AM